I had high myopia since 1985 and was adviced excimer laser treatment to remove my specs in Feb. 1997. After treatment I found improvement in my vision. But in May 1997, I received injury on my forehead. I slept for a few hours and when I woke up there was distortion in the vision in my left eye. I was away from Delhi at that time. I came back to Delhi after 10-12 days and reported this at the centre where the excimer laser treatment was received. The doctor diagnosed it as detachment of the retina and referred me to the AIIMS (Dr. Rajendra Prasad Centre for Ophthalmic Sciences at All India Institute of Medical Sciences.) I was admitted to the AIIMS in June,1997 and had fever. After four days of admission , I had difficulty in vision in the right eye also and doctors after examining me said that there was fresh detachment of the retina in the right eye . The fever subsided in the same evening and the doctors operated my right eye first, because it was fresh detachment. On the next day laser was done on my left eye. I was released thereafter.

At the time of discharge there was only light perception in the left eye and the right eye had some vision. Then In the first week of July, I was admitted to the AIIMS again and the left eye was also operated upon.

At the time of my discharge I had only light perception in the left eye and with the right eye I could see only movement of fingers at distance of 10 Cms.

From 1997 to 2002 I went regularly to the AIIMS for proper checks but without any improvement. In the year 2000 I also consulted Shankar Netralaya, Chennai, and they reffered me back to the AIIMS. I also took Homeopathic Treatment for one year and some Ayurvedic Treatment also, but without improvement in November 2002 I started taking treatment from Dr. Ved Prakash Banga at his centre. The results are encouraging these are-- 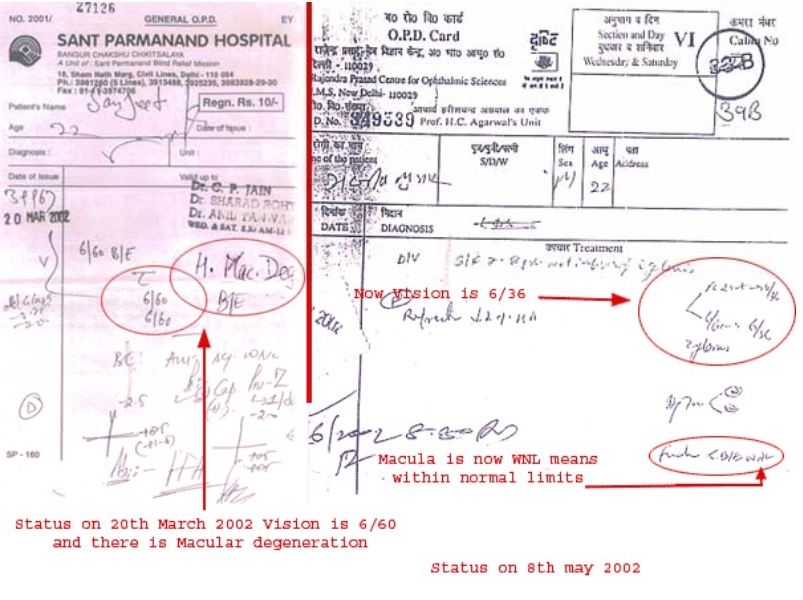